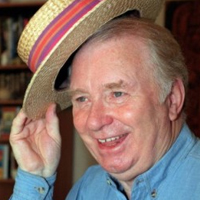 Wally Carr has had an extraordinary career in Australia, New Zealand and the United Kingdom as an entertainer and producer.

Most recently he was responsible for the Adelaide Cabaret Festival sell-out success Hotspots, celebrating the greats of Adelaide cabaret in the 1960s.

He’s trodden the boards as a song and dance man since his teens - through J.C. Williamson days, live television, the Paprika, Bull & Bush... and, usually in the company of singer Marie Fidock, he continues an impressive work schedule to this day.