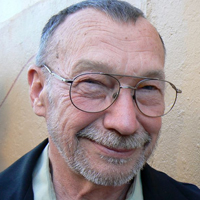 Edwin Hodgeman, known in the trade as "Teddy", has been an actor of distinction in Adelaide and nationally for many decades.

Born in 1935, he emerged in the ’50s from under the wing of the legendary pioneer Adelaide theatre director Colin Ballantyne - the man many deem the founding father of modern professional theatre in South Australia.

Hodgeman's career has included significant theatre roles and endless critical approbation. He is recognised as a respected classical stage actor - and a versatile one. He also has worked extensively in Australian cinema - and his long list of credits includes Shine, Robbery Under Arms, Mad Max Beyond Thunderdome, Playing Beattie Bow, Tracks of Glory, The Survivor, Sara Dane, Eureka Stockade, Human Touch, and Look Both Ways.