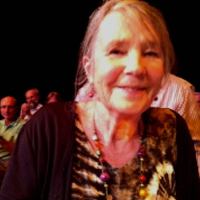 Barbara West has been treading the boards in Adelaide since the 1950s when she arrived from the UK with her writer husband and children, quickly becoming one of those at the Dutkiewicz Studio where "The Method" was studied and performed.

She already had RADA qualifications and experience on television and in theatre. Thus was West one of the early actors onstage at the historic Union Hall at Adelaide University and, indeed, she went on to act with and even direct at the Guild.

She has worked for the State Theatre Company in its many incarnations. She has worked with John Noble's long-lamented Stage Company and today's VitalStatistix and performed in Festival shows such as My Life, My Love.

Then there are her film and television credits Robbery Under Arms, Breaker Morant, The Shiralee, Tracks of Glory, The Battlers, Human Touch and most recently in The Moment, a very beautiful short film adapted from a story by Shaun Micallef directed by Troy Bellchambers and Shane McNeil.