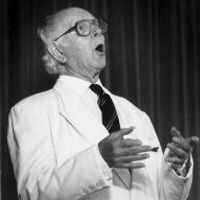 Harold Tidemann was considered the elder statesman of Adelaide's theatre critics until his death in 2002 aged 96.

He also established a distinguished reputation as a singer, a protege of South Australian-born international baritone Peter Dawson.

For two decades he wrote a regular Saturday column on music, stage and screen.

His death in 2002 was received with silent homage before curtain at three productions.