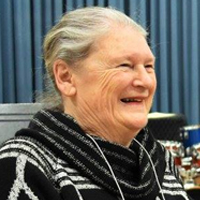 Diana Harris OAM is one of Adelaide’s most distinguished pianists, accompanists and educators. She graduated in accompanying with First Class Honours from the Elder Conservatorium and has performed with many local, national and international musicians in Adelaide and beyond. She taught music at the Adelaide College of Advanced Education and was a founding member of the academic staff at the Flinders Street School of Music from 1978. She was appointed visiting lecturer at the Elder Conservatorium, University of Adelaide in 1983, and became a member of the University following the merger of Flinders Street with the Elder Conservatorium in 2002. In 1997 Diana constructed an undergraduate course to honours level in accompanying, the first in Australia outside the university sector, which attracted considerable national recognition. She was awarded the TAFE Gold Medal for her outstanding contribution to the education of musicians. Diana was a strong local presence in the Australian Society for Keyboard Music which promotes classical music and provides assistance to students to further their potential as pianists. She is the founding Vice-President of Recitals Australia, the successor to the ASKM. In 1984 she founded the Accompanists’ Guild of SA, attracting the patronage of the late Geoffrey Parsons, Phillip Moll, Stephen McIntyre and Noreen Stokes. Diana is a strong supporter of Australian Music and new composition. She has received an Australian Music Centre Award for her distinguished contribution to the advancement of Australian music, and in 2008 was awarded the Medal of the Order of Australia (OAM) for service to education in the field of music in the Queen’s Birthday Honours.